Fandom conventions and expos are celebrated for creating a welcoming community. Unfortunately, they’ve recently been making headlines for the less-than-ideal behavior of some members of that community. From a Washington Post article on “creeping at cons” to more and more women sharing their experience of sexual harassment at genre conventions, this is an issue that organizers can’t afford to ignore.

It’s only natural that you want all your fans to feel welcome at your event. But there are also some strategic reasons to make inclusivity your number one priority. While some organizers may worry that publicizing an anti-harassment policy might promote a bad image of their convention, the opposite is true.

After all, some conventions have recently come under fire for not having anti-harassment policies in place. In fact, a group called Geeks for CONsent recently submitted a petition with nearly 3,000 signatures urging con organizers to formalize and publicize anti-harassment policies. Meanwhile, events that have spoken out against comic con harassment have been applauded.

To find out how you too can take action, we asked both con-goers and organizers for advice. Read on to find out who feels most at risk at events like yours, and the simple steps you can take to make your event a welcoming space for everyone.

Who feels unsafe at cons?

Our recent survey of more than 2,000 fan event attendees shows that cons aren’t a boys club any longer. 49% of respondents identified as female, 49% as male, and 2% as non-binary. But don’t celebrate just yet: while comic con attendees have become more diverse, the cons themselves haven’t necessarily become more inclusive.

Disturbingly, 7% of all fans surveyed reported feeling unsafe or uncomfortable at fan events. And it’s not just women who feel vulnerable: while 54% of these fans were women, 45% were men.

Surprisingly, the fans most likely to feel uncomfortable at cons are actually the most valuable attendees for organizers. These fans are nearly twice as likely to consider themselves “superfans” than most attendees, and over a third have attended five or more cons in the past year alone. These are passionate fans, nearly half of whom have been attending cons for more than 10 years. So what is making them feel uncomfortable at cons now?

A separate survey about sexual harassment in the comics industry revealed what makes fans most uncomfortable. The most common fan complaint about conventions is being photographed against their wishes. Another 13% had unwanted sexual comments made about them at cons, and 8% of people of all genders reported being groped or assualted at a comic con. Considering the massive size of many cons and expos, that’s thousands of people who have been forced to balance their love of fandom with a fear of harassment.

7 Strategies to Prevent Harassment at Your Con or Expo

Lindsay Thomas, the mastermind behind the effort and their VP of Guest Acquisition and Communications, shared these seven simple steps she recommends to make your con or expo inclusive for everyone. 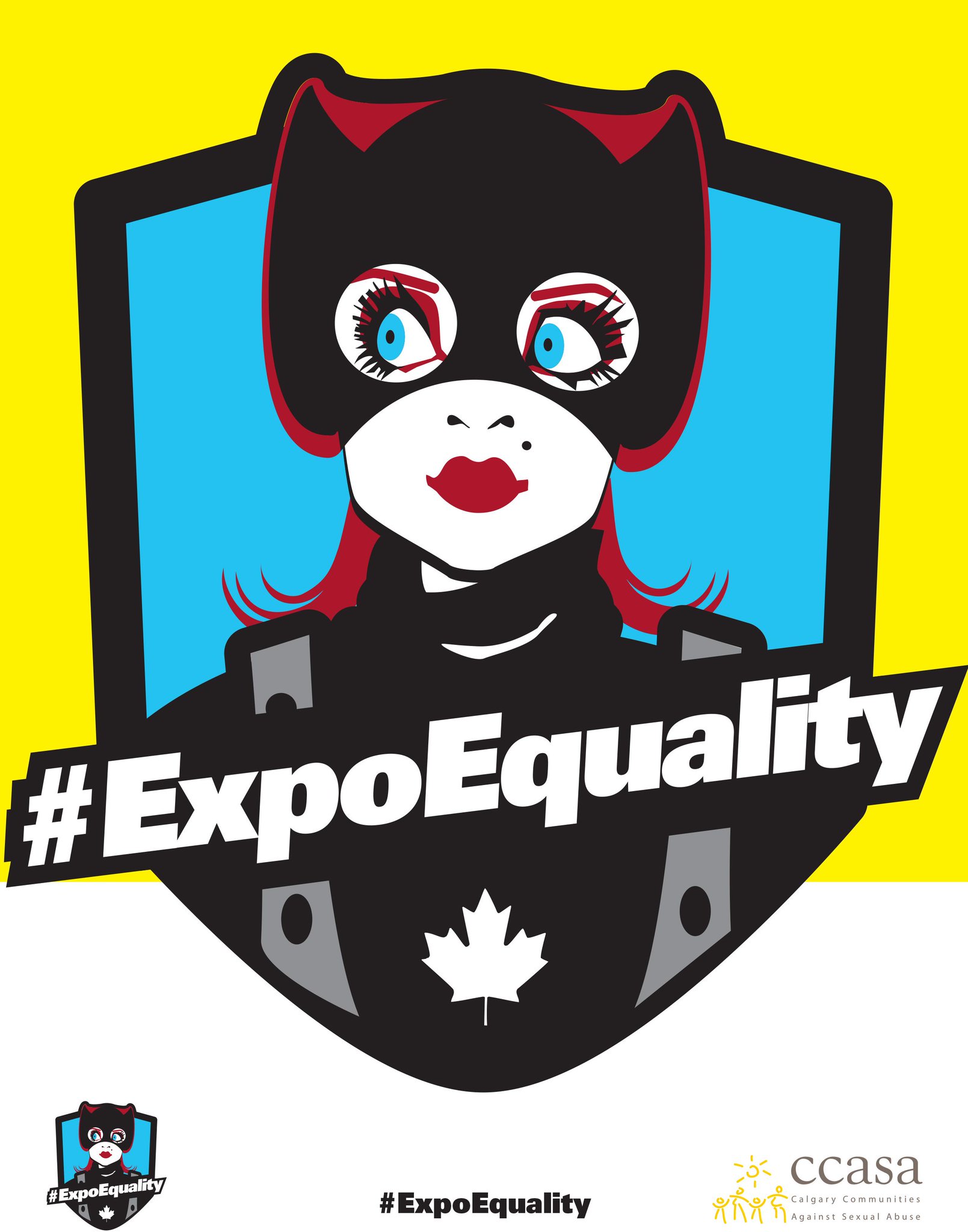 “My biggest piece of advice would be to address it openly. My priority is to have our attendees understand that we are not afraid to look at this issue, and we’re not afraid to listen to them. I would encourage other promoters to take that same stance. Approach it from the perspective of trying to prevent it before it happens instead of telling potential victims that the responsibility to fear it and prevent it is theirs alone.”

Before the event, Calgary Expo focused on education and open-ended conversation. From a blog post on Facebook to the #expoequality hashtag on Twitter, they engaged in discussion with people of all opinions. They focused on informing fans about what harassment is, and what conduct is and is not acceptable at cons. And if trolls did try to dismantle the conversation, they used a three-strike rule before banning them on social media.

Don’t be afraid to talk to other organizers as well. Calgary Expo recommends talking with managers of other cons in your area to compare notes. “The more we can standardize things and make it an industry-wide movement, the better,” Thomas said.

2. Don’t put the responsibility on victims to stop harassment

“A lot of information that’s put out there is always focusing on how the victim can prevent harassment, but no one should have to feel guarded, or insecure, or paranoid. At our show we want people to feel safe. If you’re told you need to travel in groups or have to dress a certain way, that’s not going to give you a feeling of safety.”

Rather than teaching people how to avoid harassment, educate people on what harassment includes and how behave differently. A con or expo should be a welcoming place, where people of all genders can wear cosplay or not and express themselves without fear. As Thomas points out, telling them to avoid certain behavior doesn’t solve the problem — it just makes for a more paranoid experience for everyone involved.

Make a formal policy about harassment and include it on your event website, ticketing page, and FAQ. It doesn’t have to be long or complicated to be effective — one paragraph specifying that you do not tolerate harassment of any kind with some examples is sufficient. And be prepared to back up your statement at the event. If you say you don’t tolerate harassment, you need to be ready to send perpetrators home.

“The Comic & Entertainment Expo Committee does not tolerate harassment of any type at any of its events. Harassment can take many forms. It may be, but is not limited to, words, signs, offensive jokes, cartoons, pictures, posters, e-mail jokes or statements, pranks, intimidation, physical assaults or contact, or violence.”

Having a policy is vital, but you can’t count on all attendees to read your FAQ thoroughly. That’s where other publicity comes in handy. Calgary Expo posted a Facebook blog on the topic and made a YouTube video with local law enforcementto explain what harassment is and why it’s not acceptable. The video was watched over 8,000 times, significantly more than most of their video content. Organizers also reached out to mainstream media, and received a great response from fans.

Don’t worry — creating this type of content doesn’t have to take long, and you can reuse it each year in reminder emails to attendees.

5. Partner with a local organization

“A major benefit to having an organization like CCASA on board was to educate us as we developed our language and shifted our thinking and to be a resource for our staff on site. Advice: you do not have to do this alone. There are professionals in every city who can assist, and sometimes all you have to do is ask.”

Calgary Expo brought in a local nonprofit that offers counseling services and information on what consent is. The organization, Calgary Communities Against Sexual Assault (CCASA), was featured in their pre-event video and had a presence at the event itself. The volunteers were there to answer questions in a non-threatening way, and support staff and attendees in case anything did come up.

Just the presence of an organization like CCASA made a big difference. The organizers could be confident as they discussed a sometimes tricky topic with the volunteers’ guidance. And at the event, many fans told organizers that having CCASA there made them feel safe and supported, whether or not they actually interacted with the organization.

6. Have fun reminders at the event

Harassment is a serious topic, but that doesn’t mean you can’t have fun with it. Calgary Expo had posters around the event that read “Cosplay is Not Consent” with super-hero tie-ins. “The gist of the posters was, ‘What would your superhero do in this situation?’” Thomas said. “Superman is not using his X-ray vision to look through people’s clothes.”

Especially if cosplay is a part of your event, be sure to be explicit about boundaries. “People spend hours, weeks, months on their costume. To complement the cosplay is fine,” Thomas said, “but if you sexualize it that’s different. There’s a difference between looking and leering. Really the message we’re trying to get out there is the boundary is the individual. If they say no, then that’s that. If someone says they’re uncomfortable, there’s no questioning that.”

“We had a staff member who is trained with dealing with conflict management on-site. As an organizer, you’re pulled in ten million directions. The last thing I want is for someone to feel that we weren’t giving them our undivided attention. So for me, it was really important for us to have someone on hand to sit with anyone, listen to them, take notes, and then help them understand we are there with support.”

You’ve prepped all you can to make your con or expo a safe space — but attendee behavior is out of your control. That’s why it’s important to prepare staff and security to deal with the worst possible scenario. If you don’t have the resources for a designated staff member, this is where partnering with a local organization can be supremely helpful.

BriteTip: Use technology to stay on top of safety day-of

Eventbrite has worked with organizers who use real-time bib technology at their event to combat comic con harassment. Security was able to use the free Eventbrite Organizer app to scan badges and pull up the information of anyone involved in a complaint. If there were any issues, this let them know who attendees were and blacklist people as needed.

This sort of tech is especially important if you attract big crowds: one survey found that 20% of respondents who experienced harassment at a con didn’t name their harasser simply because they didn’t know the harasser’s name.

“We got a lot of thanks for being so open and taking a firm stance on this. A lot of people are afraid to dress it because they don’t want it to seem like it’s a problem at their show… But if a person has an option between a show like Calgary Expo and a show without a policy, our policy may be the deciding factor.”

Not surprisingly, fans love events that prioritize their safety. Calgary Expo received one email from a young woman who had given up attending conventions because of a couple really bad experiences. She attended Calgary Expo on the advice of a friend, and felt really safe. And she’s not the only one.

In addition to tons of social media buzz, Calgary Expo has received tons of press, quoting fans who felt the environment was “more respectful,” that “women [could] be confident in their costumes,” and they knew they “could say something to Expo staff and that it wouldn’t be tolerated and I wouldn’t be blamed/shamed for my cosplay.”

Follow Thomas’s simple steps to stop harassment before it begins at your con, and your fans will thank you, too.

Get started with Eventbrite in minutes

Get event creator insights sent directly to your inbox