Last post we talked about Developing the 3 Year Frontend Vision, in this post we will go into how that vision, the tenets, requirements, and challenges shaped the Strategy moving forward.

One of the key themes in Eventbrite since I joined is DevOps, moving ownership from a single team who has been responsible for ops and distributing that responsibility to each individual team. To give them ownership over decisions, infrastructure, and to control their own destiny. The first step in defining the Strategy was to put together what a Technical Strategy is, and the foundation for that strategy.

The overall Technical Strategy is based on availability and ownership. Starting with the way we build our services and frontends, to the way we deploy and serve assets to our customers. The architecture is designed to reduce the blast radius of errors, increase our uptime, and give each team as much control over their space as possible.

Moving forward we will achieve High Availability (HA), in which our frontends and systems are resilient to faults and traffic, and will operate continuously without human intervention. In order to achieve HA, we will utilize Managed AWS Services or redundant fault tolerant software, and by utilizing content delivery networks (CDN) to increase our performance and resilience by putting our code as close to the customer as possible. We will ensure that all aspects of the system are tested, fault tolerant, and resilient, and that both the client-side and server-side gracefully degrade when downstream services fail.

DevOps combines the traditional software development by one team and operations and infrastructure by another into a single team responsible for the full lifecycle of development and infrastructure management. This combination enables organizations to deliver applications at a higher velocity, evolving and improving their products at a faster pace than traditional split teams. The goal of DevOps is to shift the ownership of decision making from the management structure to the developers, improve processes, and remove unproductive barriers that have been put in place over the years. 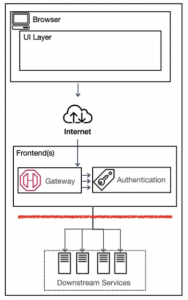 Once we had the foundation of the strategy defined, it was time to define the scope. To understand how to develop a strategy, or to even define one, we need to understand what makes up a “frontend”. In our case, the Frontend is everything from the backend service api calls to the customer. Because of this, we need to design a solution that allows for code to be run in a browser, on a server, service calls from a browser. Once you define the surface area of the solution, it becomes apparent that the scope and complexity of this problem is quickly compounding. 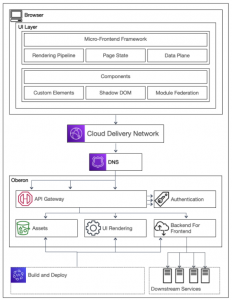 We need to define an architecture for everything above the red line in the above graphic. In order to simplify the design, I broke this down into three main areas; The UI Layer consisting of a micro-frontend framework with team built

Custom Components, a shared Content Delivery Network (CDN) to front all customer facing pages, and a deployable set of bundled software that we code named Oberon, including a UI Rendering Service and a Backend-For-Frontend.

The UI leverages the micro-frontend architecture and modern web framework best practices to build frontends that leverage browser specifications while being resilient and team owned.

“An architectural style where independently deliverable frontend applications are composed into a greater whole”.

Xenon Stack describes a Micro-frontend as

Reading through the many opinions and definitions, I felt it was necessary to get a clearer understanding, and for everyone to agree what a micro-frontend architecture is. I worked with a couple of other Frontend Engineers to put together the following definition for a Micro-Frontend.

A Micro-Frontend is an Architecture for building reusable and shareable frontends. They are independently deployable, composable frontends made up of components which can stand on their own or be combined with other components to form a cohesive user experience. This architecture is generally supported by hosting a parent application which dynamically slots in child components. Components within a micro-frontend should not explicitly communicate with external entities, but instead publish and subscribe to state updates to maintain loose coupling.

Micro-frontends are inspired by the move to microservices on the backend, bringing the same level of ownership and team independent development and delivery to the frontend.

In order to avoid frontends that over time inadvertently tightly couple themselves and create fragile un-reusable components, we must build components that are encapsulated, isolated, and able to render without the requirement of any other component on the page.

The Component Rendering pipeline renders components to the customer while the framework defines a set of Interfaces, Application Context, and a predictable state container for use across all of the rendering components.

State management is responsible for maintaining the application state, inter-component communication and API calls. State updates are unidirectional; updates trigger state changes which in turn invoke the appropriate components so they can act on the changes.

Our current architecture has resilience issues, where one portion of the site may become slow or unresponsive and that has a direct impact on the rest of the domain, and in many cases cause an overall site availability issue. In order to get around some of this issue, we add a CDN at the ingress of our call stack. Every downstream frontend rendering will contain Cache-Control headers, in order to control the caching of assets and pages in the CDN. During a site availability issue, the rendering fleet may increase the cache control header, caching for small amounts of time (60 seconds – 5 minutes max), for pages that don’t require dynamic rendering, or customer content. Thus taking load off the fleet and increasing it’s resource availability for other areas.

Oberon is a collection of software and Infrastructure-as-Code (IaC) that enables teams to set up frontends quickly and to get in front of customers faster. It includes a configurable Gateway pre-configured for authentication as needed, a UI Rendering Service to server-side render UI’s, UI Asset Server to serve client side assets, and a stubbed out Backend-For-Frontend.

The UI Rendering Service defines a runtime environment for rendering applications, their components, and is responsible for serving pages to customers. The service maps incoming requests to applications and pages, gathers dependency bundles, and renders the layout to the customer. Oberon will leverage the traffic absorbing nature of a CDN with the scaling of a full serverless architecture.

BFFs are optimized for each specific user interface, resulting in a smaller, less complex, and faster than generic backend, allowing the frontend code to 1) limit over-requesting on the client, 2) to be simpler, and 3) see a unified version of the backend data. Each interface team will have a BFF, allowing them autonomy to control their own interface calls, giving them the ability to choose their own languages and deploy as early or as often as they would like.

Now that we’ve published the 3 Year Frontend Strategy, the hard work begins. Over the next few months we will be defining the low level architecture of Oberon, and working on a Proof Of Concept that teams can start to leverage in early 2022.